John Linehan (sometimes spelled Lenihan) (1860-1932) was a fiddle teacher of the generation before Pádraig O’Keeffe and Tom Billy Murphy. He was himself a pupil of Corney Drew, although it’s difficult to find any commonality between what little we know of either of their repertoires. He lived in Glounreigh (also spelled Glenreagh or Glounreagh), Co. Cork and is buried in Kiskeam cemetery. His students included fiddlers Sean B. O’Leary and Johnny O’Leary of Kiskeam as well as Maurice O’Keeffe. He would teach out of his home as well as traveling to students’ homes. Sean B. O’Leary described him as “a dignified, serious music teacher, who took pride in his tuition and musical performance.” Whereas Tom Billy and Pádraig had reputations as easygoing and mellow-tempered teachers, Linehan seems to have taken a disciplinarian approach. If a student played out of tune or diverged from the written music, Linehan would berate him, “Where are your ears, you demon? I’ll skin you!”

Maurice O’Keeffe said that he was the last pupil of John Lenihan, who was about 75 years old when Maurice was ten. He lived within easy walking distance. Maurice was “taught the music with scales, lines and spaces at eight pence a tune”. Lenihan could not play himself at that time because his fingers had gone stiff, but though he was near the end of his days, he seems to have lost none of his strictness. O’Keeffe recalled, “As a music master he was very strict and would not accept any sloppy work or half measures. On one particular occasion when I was supposed to visit him I was so afraid that I decided to ‘mitch’. I hid in the glen and when my mother enquired if I had a new tune I told her that I did not because I had not the previous one learnt ‘by heart’. By some chance my secret leaked and Mr. Linehan informed my mother. His message to her read ‘Tell that “barrow fellow” attend me tomorrow!’ My mother escorted me and I never missed another session.”

Dan Herlihy’s book Sliabh Luachra Music Masters contains 42 of his manuscript tunes which date from around 1910. Looking through these tunes gives an interesting glimpse of the music that was played in Sliabh Luachra at that time. There are some polkas and slides, but also a number of tunes that seem to be direct from the Scottish tradition. It also contains around eight nationalistic song airs, perhaps reflecting their popularity in a revolutionary period, and supporting the contention that such songs were beginning to supplant traditional airs. His polkas are interesting in their stage of folk processing. They are two part dance tunes but lack the characteristic house dance ‘swing’ found in the Din Tarrant settings. However, these were teaching manuscripts for his students and do not necessarily represent the way the man himself would have chosen to play them. 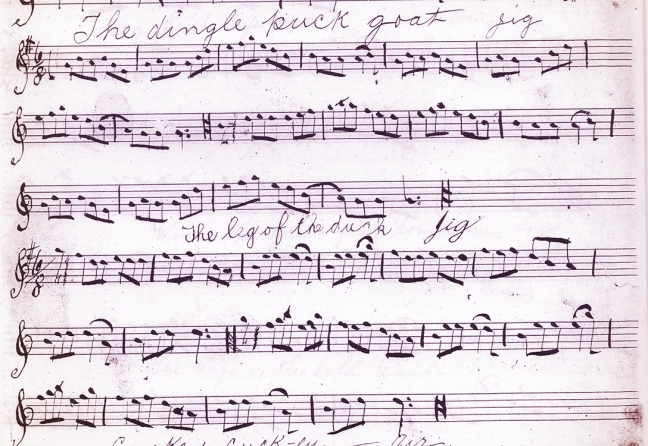