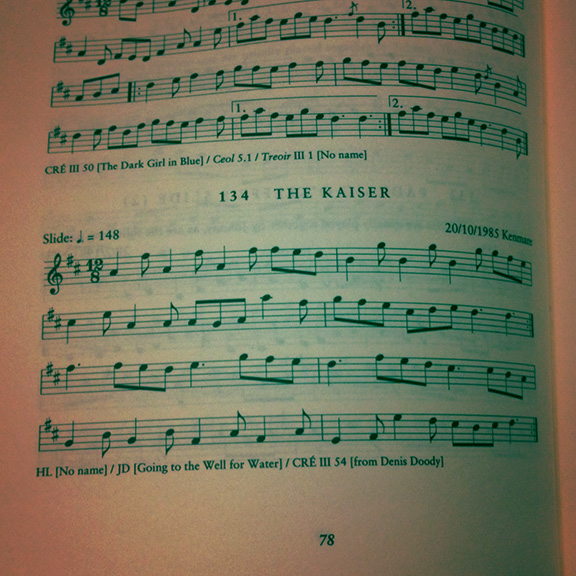 Also, and perhaps more often, known as Going to the Well for Water, but that name also applies to another slide. And calling it The Kaiser affords us the opportunity to talk about its namesake, a real character from the old days.

Pádraig O’Keeffe’s nearest neighbour, Thomas Murphy, was known locally as “The Kaysher”, though exactly how he got that nickname is unclear. The Kaiser was an entrepreneur, and in that capacity he sometimes operated under the nom de plume of “Noel C. Duggan of Glountane”. He organised house dances, raffles and other money-making stunts. His raffles were well known for the first prize always being won by somebody with an address in Sligo or Donegal. Having ‘borrowed’ a house with a kitchen big enough to accommodate the dancers, he would stand at the door charging a half crown for admission, a substantial sum in those days (the late 1940s). [Had they been caught, he would most likely have been fined five shillings on being summoned for holding a house dance without a dance licence; the other attendees would have been summoned for abetting and probably given the benefit of the Probation Act.] The musicians had free porter all night as their fee, and everyone else was charged sixpence a mug. Terry Teahan (who left for Chicago in 1928) wrote that the usual prize in a house dance raffle was a turkey or chicken; the musicians were often paid with a fowl. Maurice O’Keeffe said that the house dances, which finished around 1950, were called ‘Raffles’, because they were money raising ventures by people with big families to support. He said there were no pubs at that time because people had not the money to go in. Dan O’Connell said that most raffles took place towards the end of the year to raise enough money for Christmas. Maurice commented that when he was young a house dance might consist of the Reel o’ Skip (all reels), the High Cauled Cap (a special dance); and finally a polka set, because it was easy when people were tired.

Some memories of The Kaiser’s antics:

“The Kaiser lived directly across the road and occasionally called to Pádraig for a chat. One day I walked into the kitchen to find “The Kaiser” leaning on the back of a sugan chair, facing the door. Seated on another chair right behind him was Pádraig, and he apparently was sewing the seam of the Kaiser’s pants, which had parted. The Kaiser looked up to see who was coming and, in moving, disrupted Pádraig’s repair-work. Pádraig hit him a resounding slap on the backside and said “Ceartaigh!”. Ceartaigh is an Irish word, meaning “correct your position”, and was used by Gaelic speakers to straighten a cow that wasn’t standing correctly in her stall, and was obstructing the others.

“I remember a house dance the Kaiser organised in Culhane’s down at the bridge. The Kaiser was an entrepreneur before the word appeared in any dictionary. He was the “Noel C. Duggan” of Glountane, always coming up with raffles and stunts for making money. He had unusual prizes. I remember he put up a pony’s trap as first prize for one raffle. We all bought tickets and it never dawned on me to consider what would happen if I won the trap. I had no pony. I need not have worried. I was in no danger of winning it. Somebody with an address in Sligo or Donegal always won the top prize, and a few local people won the lesser prizes, a ten or a five-pound note here and there. This fact was not lost on the local people, but they didn’t mind. It was just a bit of craic and they took part just for the fun of it. The same trap showed up in several later raffles. The Northerners were remarkably lucky. They always won it.

“The biggest problem with the house dance was to get some houseowner to give his house for the night. It had to have a big enough kitchen to accommodate the dancers. There was also the question of damage to property, in case some of the dancers got carried away and accidentally broke some crockery, or the glass of the lamp. On the night, The Kaiser stood in the doorway and collected a half a crown from each person who went in. All the able-bodied men and women in Glountane showed up , including some old-timers who were a bit rusty in the joints, but still had a sparkle in the eye. Half a crown was a substantial sum in those days and I’m sure Jimmy Culhane got a percentage of the take for the use of his house.

“The Kaiser had organised a couple of half-tierces of stout which were located in a room off the kitchen – the kitchen table had been taken in there to make room, and it served as a bar. The musicians, one of whom was Pádraig, started up, and the sets got under way. The musicians had free porter for the night- that was probably their fee. The dancers went at it hammer and tongs. They were all great dancers, but I particularly remember Johnny “Silvey”, who was as good a dancer as he was an athlete, rising high above the crowd like Nijinsky and hammering the flags in great style when he came back down to earth. Above in the room, the old-timers, many of them athletes and dancers in their day, talked of times past and sipped mugs of The Kaiser’s porter at sixpence a mug. The dance went on all night and the following morning, as I made my craw sick way to school, I met one of the musicians, Denny Collins, on his way home. He had his melodeon tied to the bar of his bicycle. There seemed to be something wrong with the steering mechanism of his bike, but Denny didn’t notice. He had a far-away look in his eye, a smile on his face, and he was at peace with the world.

“Everybody agreed that The Kaiser’s house dance was an unqualified
success.”

-from Dermot Hanafin’s book Pádraig O’Keeffe: The Man and His Music


Be warned, the setting that Julia plays here differs a bit from the more commonly played version! 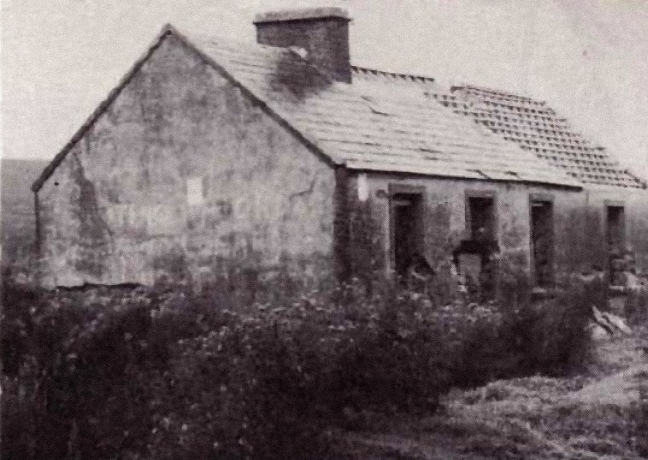 The Kaiser’s house has since disappeared, just the outline of the foundation remains.

The name seems curious, but a case can be made that it refers to the small townland of Renasup, just a short walk up the road from Lisheen on the way to Glountane. This slide can be found by this name in Johnny O’Leary of Sliabh Luachra, but like many tunes, goes by other names as well: Bridgie the Weaver’s, The Barna, The Annablaha, The Kiskeam… and probably more besides.