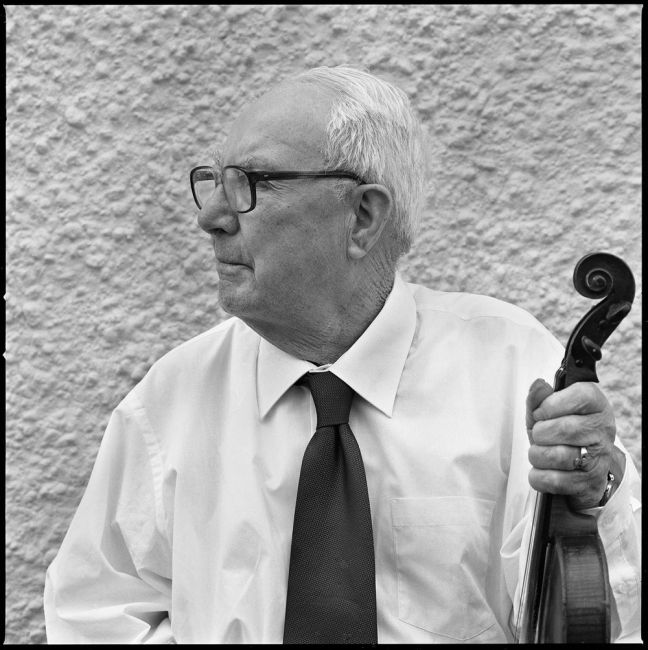 Maurice O’Keeffe (September 5, 1919 – March 22, 2017) was born and lived all his life in Glounreigh (aka Glenreagh) between Ballydesmond and Kiskeam in County Cork. His mother, Mary O’Keeffe (née O’Connell but known as Molly Morrissey), was an accomplished concertina and melodeon player from a noted musical family from nearby Glencollins, and she made sure to get young Maurice and his siblings started early on the music. When Maurice was 10 years old his mother purchased a fiddle for him from a shop in Ballydesmond and arranged for lessons with John Linehan. Linehan (also sometimes spelled Lenihan) was a renowned teacher and performer from Glounreigh who had been a student of Corney Drew. By the time Maurice started lessons with him Linehan was quite aged, and indeed it seems Maurice was his last pupil. Nevertheless, the lessons were productive and imbued Maurice with a style and repertoire that would serve him well throughout his long life. When Linehan passed away, Maurice continued lessons with his mother, and no doubt absorbed considerable music from the maternal family (in much the same way that Pádraig O’Keeffe got a part of his own music from the Callaghans of Doon.) Frequent house parties, at the O’Keeffe home and those of neighbors, guaranteed plenty of opportunity for Maurice to hone his craft.

As his skill progressed he was often called to play at the dance halls which dotted the countryside at that time. Sadly, as the dance halls died out in the 50s, so did the opportunities for local musicians to congregate, practice their craft, and earn a shilling at the same time. Maurice began to play out less and occupy himself more with his home life, raising eight children with his wife Peg, and to work as a road worker and ganger with the Cork County Council. Happily, this musical dry spell didn’t last forever, and with the advent of the set dancing revival, championed by Dan O’Connell of Knocknagree, and the increased popularity of pub sessions, came new opportunities for Maurice to play in other parts of Sliabh Luachra and establish himself as a fixture of the musical community. In later days he recalled the great crack that was had at O’Connell’s with Johnny O’Leary and Denis Murphy: “I used to sit between Johnny and Denis when we’d play at Dan Connell’s in Knocknagree, and I can assure you I wouldn’t be able to play as much as I can today without all that I learned from the two of them. Johnny’s style was totally unique. There’s nobody playing like him today. One time, I confided in Denis Murphy that I was thinking of getting a banjo and he said to me: ‘Lord God, Maurice, hould on to your fiddle’ — so I did!”

Unlike some of his peers, Maurice never produced a commercial recording, though he can be heard on one track from Johnny O’Leary’s Music For the Set. His talent as a musician was undeniable, but his true legacy is that of a tirelessly enthusiastic champion of the local musical tradition. He was known to always have an encouraging word for anyone interested in pursuing the tradition, and he would often record cassette tapes in his kitchen for friends and acquaintances, playing from his repertoire of rare and interesting tunes from his old fiddle master, along with various tidbits about the music and its history. He had a vast store of polkas and slides, as well as jigs and hornpipes, with reels following in a distant last place, as they did for many musicians of his region and generation. He generously shared these with any and all, and there must be scores of these tapes scattered all over the globe at this point!

The Maurice O’Keeffe Easter Weekend Festival has been held annually in Kiskeam since 2002, celebrating his legacy and nurturing the local tradition which he loved and championed. Until his death in 2017, he was not only the guest of honor but an active participant, playing away in the sessions until the wee hours. In 2007 he was presented with the Patrick O’Keeffe Traditional Music Award in recognition of his contribution to the tradition.

Link: Maurice’s “My Life and Music” essay from the Cumann Luachra Journal 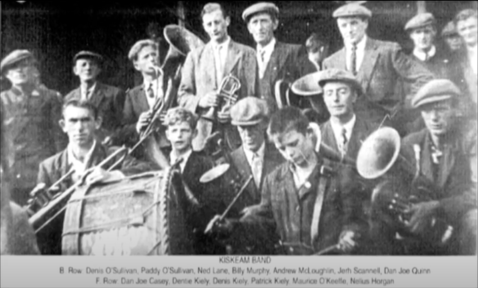 In younger years he played in the Kiskeam Marching Band

Maurice in the liner notes of Johnny O’Leary’s album

at the Padraig O’Keeffe monument in Scartaglin

playing at his 96th birthday celebration 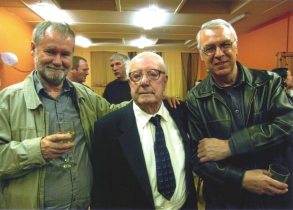 Maurice O’Keeffe with his granddaughter Eibhlín

One thought on “Maurice O’Keeffe”